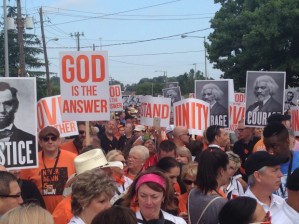 In Birmingham, Alabama, Aug. 29, an estimated 20,000 people marched through the city streets under the mantra of “Restoring Unity.”

Hosted by conservative radio talk show host Glenn Beck and Bishop Jim Lowe (pastor of Guiding Light Church, a Birmingham-area majority black congregation), people of all different colors, religious denominations and backgrounds traveled from all corners of the country to march and hold signs that read “God is the Answer,” “All Lives Matter,” “Never Again is Now,” “Love One Another,” and “Justice.”

They were joined by giants from the civil rights and faith community, including Alveda and Naomi Barber King (niece and sister-in-law of Martin Luther King Jr.), Ruth Graham (daughter of Billy Graham, the Christian evangelist who marched alongside King during the civil rights marches in the 1960s), Johnnie Moore (former Liberty University campus pastor), and Clarence Henderson (forever immortalized in the pictures of the Greensburg, North Carolina, Woolworth lunch counter sit-ins).

During this era of racial and political stratification and identity politics, this is the positive and unifying message America needs to hear. We shouldn’t allow ourselves to be divided into identity groups and social factions. Only in God will our society find healing, hope, and reunification.
This Letter to the Editor was published in the Tacoma News Tribune: http://www.thenewstribune.com/opinion/letters-to-the-editor/article33543039.html#storylink=cpy