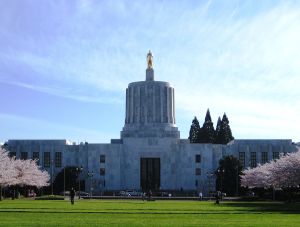 Nora Harris, 64, is in an advanced stage of Alzheimer’s. Although she is conscious, she can no longer use utensils to eat and drink.

Under current Oregon state law, so long as Nora is conscious, her caretakers must offer her food and water and help her to eat and drink.

Bill Harris, Nora’s husband, believes that Nora would rather starve to death. He sued to stop the spoon-feeding last year but lost the case.

Oregon lawmakers are now considering legislation that would allow nursing homes and hospitals to starve and dehydrate patients like Nora.

Oregon Right to Life says SB494, which passed the Senate last week, “would allow the starving and dehydrating of patients who suffer from dementia or mental illness.” David Kilada, Oregon Right to Life’s political director, explained the legislation in a post on ORTL’s blog:

“SB 494 removes current safeguards which prohibit surrogates from withholding ordinary food and water from conscious patients with conditions that don’t allow them to make decisions about their own care. Currently, patients like Nora are given help with eating and drinking when they cannot do it themselves. This is not tube feeding or an IV—this is basic, non-medical care for conscious patients.

“The way these safeguards are removed is subtle. A cursory look at SB 494 might lead you to think it merely updates the law regarding advance directive. This is true, but there’s more. If the bill passes, it could allow a court to interpret a request on an advance directive to refuse tube feeding to also mean you don’t want to receive spoon feeding! SB 494 would also create a committee, appointed rather than elected, that can make future changes to the advance directive without approval from the Oregon Legislature. This could easily result in further erosion of patient rights.”

The patients who would be affected by SB494 aren’t comatose. They aren’t relying on ventilators, tube feeding, or an IV to stay alive. Instead, these patients are fully conscious and aware; they are simply unable to feed themselves.

Current Oregon administrative rules require that nursing homes offer their patients three meals and snacks each day. The facilities must also provide “assistance with eating (e.g., supervision of eating, cueing, or the use of special utensils).”

Patients can refuse to eat the food they are given, but Nora still expresses a desire to eat. SB494 would allow Nora’s nursing home to withhold food and water from her, even if she wants to eat and drink.

With its passage in the Senate, SB494 now moves to the House of Representatives. Oregon was the first state to legalize physician-assisted suicide in 1997 for terminally ill patients. Since then, a total of 1,127 patients have died from doctors giving them prescription medication to end their lives, according to a 2017 report by the Oregon Public Health Division.

This article was originally written for the Family Policy Institute of Washington.