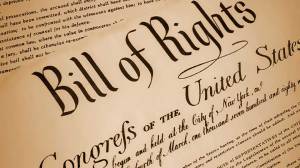 By April 1777, John Adams—then a delegate in the Continental Congress—felt a sense of growing despair. Facing the realization that American success in the War for Independence was anything but certain, he grew concerned that his countrymen were losing their resolve to fight in the face of consecutive military defeats and that they were growing wearisome of the sacrifices necessary to secure independence and liberty for all.

Distressed but still clinging to the hope that God would come to the aid of his fledgling nation, the future president wrote a letter to his wife Abigail, in which he made this startling declaration:

“Posterity! You will never know, how much it cost the present generation, to preserve your freedom! I hope you will make a good use of it. If you do not, I shall repent in Heaven, that I ever took half the pains to preserve it.”

Perhaps the most treasured of these freedoms is religious liberty. Called the “first freedom” because of its place as the first inalienable right protected by the First Amendment of the Bill of Rights, religious freedom is also protected by the Idaho Constitution, which forcefully affirms:

“The exercise and enjoyment of religious faith and worship shall forever be guaranteed; and no person shall be denied any civil or political right, privilege, or capacity on account of his religious opinions.”

Despite its legally protected status under our federal and state constitutions, religious liberty is under attack today.

Here are four reasons Christians should be concerned about preserving religious freedom:

Our founding fathers warned that a government willing to infringe religious liberty will soon begin violating other dearly held rights. James Madison, the ‘Father of the Constitution’ and our fourth president, rightly cautioned:

“There is not a truth to be gathered from history more certain than or more momentous than this: that civil liberty cannot long be separated from religious liberty without danger, and ultimately without destruction to both.”

The founding generation sacrificed much to secure our freedoms, as have generations of soldiers, statesmen, and citizens since. Christians today must take seriously their duty to preserve religious liberty for their neighbors and children, and for future generations.

For their sake and ours, let us recommit ourselves to this righteous cause, protecting our freedom to share the Gospel and our right to live, work, and raise our families according to the precepts of God’s Word.

This article was written for Family Policy Alliance of Idaho.