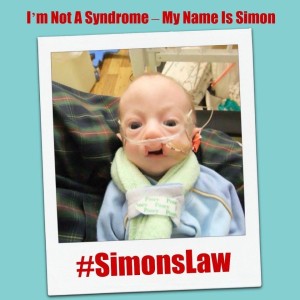 Simon Dominic Crosier was born almost ten years ago. Although he lived only a short three months, his story is inspiring lawmakers around the country to pass legislation protecting the rights of parents to make medical decisions for their children—and Idaho may be the next state to pass one of these “Simon’s Laws” named in his honor.

It wasn’t long after Simon’s birth and postnatal Trisomy 18 diagnosis that his parents, Scott and Sheryl Crosier, began noticing that their son wasn’t receiving the same medical care as other children without the chromosomal disorder were getting. Simon had been born with a heart defect (which is common among Trisomy 18 children) and would need constant care from his hospital medical team until he became strong enough to undergo heart surgery.

Like most newborns, Simon loved snuggling into his parents’ chests. He would get especially excited when his older brothers came to visit him in the hospital or when music was played for him.

Yet when the dreaded day came that his oxygen levels began dropping, Scott and Sheryl were surprised the doctors and nurses didn’t do more to save their child. It was only after his death that it became clear the doctors had placed a do not resuscitate order in his file and had been withholding nutrition from him, all without notifying his parents.

After hearing Simon’s story, Rep. John Vander Woude (R-Nampa) introduced House Bill 519, legislation meant to make sure what happened to the Crosier family will never happen to a family in the Gem State.

The Idaho Simon’s Law would protect parental rights during critical times when parents need to be focused on their child—not worrying about whether their child’s healthcare could be taken out of their hands. This would be accomplished through:

We believe that children are intimately known and lovingly protected by their parents. It is well-established in Idaho law that parents have the fundamental right to direct the care, upbringing, and education of their children—and Simon’s Law would build on that foundation.